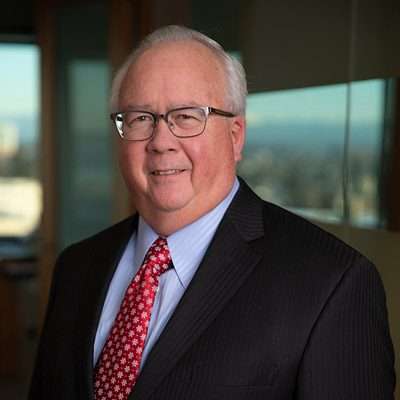 Geoff is a shareholder and has been at Anderson Hunter since 2005. Geoff is one of the most active trial attorneys in Snohomish County, and routinely handles cases in Island, Skagit and San Juan Counties as well. Although experienced in many litigation areas, Geoff’s practice primarily involves all areas of family and domestic law, as well as business and commercial litigation. He also litigates real property and boundary disputes, estate and will contests, and guardianships. Geoff has represented clients at all court levels, including before the Court of Appeals and Supreme Court.

Geoff is admitted not only to practice in the state courts of Washington and Montana but is also admitted to practice before the federal courts in both of those states and the 9th Circuit Court of Appeals.
He is recognized as a leader in the legal profession both locally and statewide. He has served as one of the Board of Governors of the Washington State Bar Association and was elected Treasurer of that organization in 2010-2011. He also served on the Rules of Professional Conduct Committee, chaired the state task force to revise the rules applicable to attorney discipline cases (ELC’s) and has often been a lecturer on legal ethics. He is a past board member and president of the Snohomish County Bar Association.

Geoff has received the singular honor of being awarded the Snohomish County Clerk’s Choice Award in 2004, 2005, 2006, and 2011, not only for his trial advocacy but for his demeanor and effectiveness when serving as a Judge Pro Tem and Superior Court Commissioner Pro Tem. Geoff is also a skilled mediator, assisting other attorneys and their clients in settling cases, and arbitrator in cases that cannot be settled.